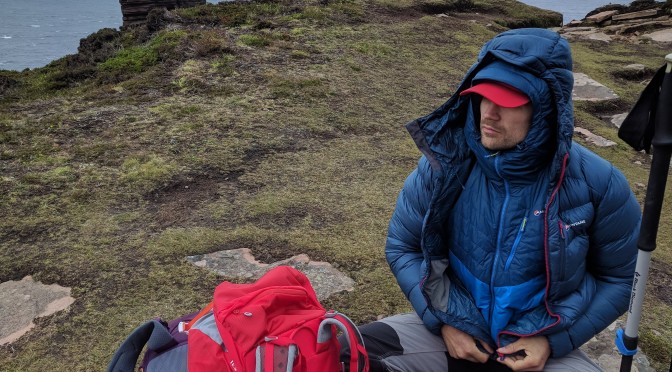 The first Blind Lead the Old Man of Hoy, off Orkney, Scotland

On the 4th June 2019, I successfully became the first blind person to lead the classic East Face Route (Original Route) E1 5b (6 pitches) up the Old Man of Hoy. I led all 6 pitches clean, placing my own gear as I climbed. To be honest probably most of the trad routes I have led are a blind person first, but this iconic Scottish Sea Stack which figures in Hard Rock seems special.

This is the most adventurous hard trad rock route I’ve done, it was truly epic! The climb was only half the story. Wild camping and then an hours walk to the headland. A tricky descent on treacherous grass slopes and scramble across to the base. A late start waiting for the wind to drop, leading to a top out at 10:10pm. Followed by 3 massive abseils back down, it was dark when we hit the deck. Then repeating the tricky and slippery scramble to get back up the cliff relying on step by precarious step instructions from Molly. And lastly the hour long walk back to the tents, reaching my sleeping bag at 2:45am with the sun threatening to rise again. It was such an amazing day, unreal!

There has been great media interest and I’ve received hundreds of messages from all round the world congratulating me on the historic ascent! It’s been quite surreal to say the least. It’s appeared in newspapers, the Scottish Parliament and I was also invited to BBC Broadcasting House in London for a live TV interview! If you missed it, here is my first TV appearance:

I even got a mention in the Scottish parliament! WOW!
Scottish Parliament Motion

A couple of broadsheets featured me too: 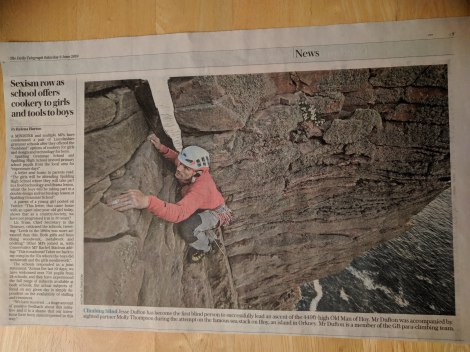 The best bit of all is that Alastair Lee was there filming my ascent which will be shown as part of the 2019 Brit Rock Tour. The premier and tour dates should be announced soon. Watch this space..