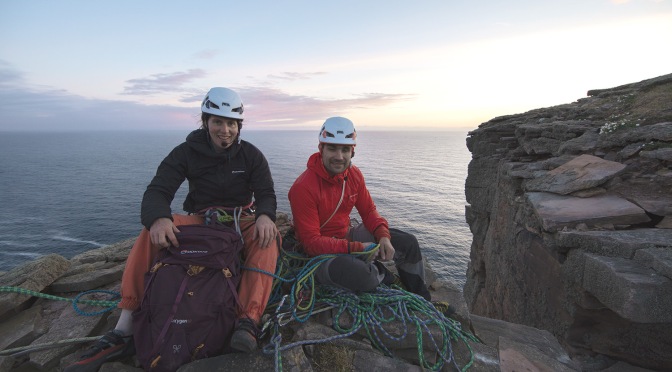 My ascent up the Old Man of Hoy is quite well documented but what I get asked a lot is how I got down! Indeed, a good question. It’s not covered extensively in Alastair Lee’s film ‘Climbing Blind’ for several reasons – it was really late, it was dark, we were all tired and hungry and had a ferry to catch early the next morning! Descents are where most accidents happen, so full concentration was needed as it wasn’t straightforward. So here goes…

As the weather dictated our start time and despite making good progress up the stack it was 10:10pm when we reached the top. With it being so far North, there was still some light left, but the sun was setting. I only wish that I had a little more time on top to take in the accomplishment, it was quite a moment. A puffin joined us on the summit as the sun was setting and I had the full 360 degree panorama described to me, it sounds stunning! Molly then whipped out my white cane that she’d carried in her backpack the whole way up, “are you going to use this to find your way down?!” Normal service had resumed. We did need to get a shift on, although the darkness didn’t bother me, it would have had a big effect on the rest of the crew and of course Molly’s ability to sight guide me.

So to get back down you have to abseil. In some ways it’s quite straightforward and in others not so much… I generally prefer abseiling to having to scramble down around the side of the cliff, but on the Old Man of Hoy scrambling down wasn’t an option. Abseiling from The Old Man was reasonably tricky. Our climbing ropes are 60m long. You have 2 ropes so you can tie them together and descend a full 60m in one go, but you then have to attach to an anchor, pull your ropes down after you and start again. As The Old Man is 137m tall you have to make 3 separate abseils to make it back down to the beach below. Fortunately, as Alastair and his rigger Mark were with us, we had 2 pairs of ropes that helped to keep things moving.

Molly and I used our ropes for the first abseil, all 4 of us descended and as Molly and I pulled our ropes through, Alastair and Mark used their ropes to descend to the anchor at the top of the Coffin pitch. We then used Molly and I’s ropes again for the 3rd abseil, a monster 60m all the way to the beach. Darkness had fallen by this point and as this section is overhanging the last abseil was in free space and total darkness for its entirety. I remember as I set off I had a slight rotation so found myself spiraling down the rope listening to the crashing waves below. I remember thinking “I hope someone is going to tell me when I’m close to the ground. I don’t fancy lowering myself straight onto my arse”…

By the time we had all completed the abseils and were on the beach at the base of the stack it had just gone midnight. Time to scramble back up that dodgy little path with the death falls, oh goodie. I wouldn’t say it was pleasant but going up is a lot easier than going down. We reached the headland at about 01:00. Time for a quick celebratory dram of whiskey and some much needed hot food from the camera guys, which was greatly appreciated before the walk back to the bothy. I think I finally made it to my tent at 02:45 as the mid-summer Scottish sun was threatening to rise again. Not just a benightment but a bedayment, that’s only happened to me a couple of times before! But there is no rest for the wicked as our ferry home left at around 07:00 that morning (Wednesday) so we were back on it a few short hours later.

Somehow Molly found the energy to drive us all the way back to her parent’s house in Cheshire stopping only for food. Not pork pies this time, Haggis Pakora…yes apparently it is a thing in Scotland. It was tasty! So a swift stopover in Cheshire and then completed the rest of the journey back home the next day. The tiredness was now starting to kick in.

Back in the office on Friday and competing in a competition in London on the Saturday… I won my category but I’m not sure climbing sea stacks at the opposite end of the country can really be recommended as ideal competition preparation! What an amazing week it had been though!

5 thoughts on “Getting down off the Old Man of Hoy”